I was born in west Ukraine in 1999. I have 2 older half-sisters, form my father’s marriage to his ex-wife, who unfortunately died, and some of the grief from her death seemed to linger in my father, which had an impact on my family. I was considered to be the favourite child of the family, because I was the youngest and always making everyone laugh. 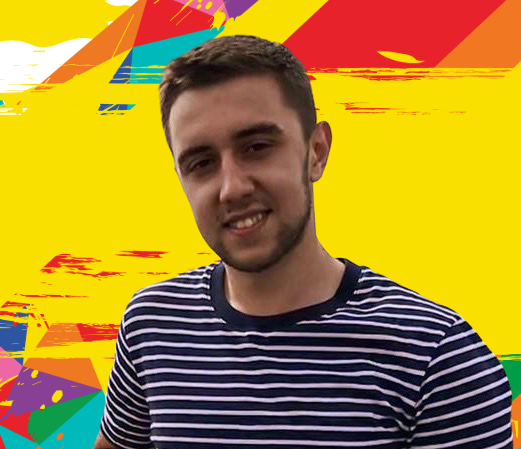 I was surrounded by girls even from an early age. Not only did I spend a lot of time with my sisters and mimic them by playing dress-up, but even the other children in our building were girls and were my earliest friend. By the time I got to school I felt I didn’t match up to the other boys, I was also a little chubby and felt weak and incompetent especially when it came to playing football. My father was an enthusiastic football player but he didn’t teach me how to play. Instead, he mocked me for staying inside with my mother to learn baking in the kitchen. But there were plenty of good times with my parents too.

When I was a teenager I remember how I tried to start relationships with girls but every time I kissed them I felt uncomfortable. I thought ”why is this? Maybe I’m just not born to be with girls”. I noticed that instead I was attracted to the male body, but I was scared I never I could never accept it. Ukraine is very conservative – a symptom of its days in the Soviet Union: people hate those who accept homosexuality, so I was fearful of that inside of myself and kept it hidden.

At the age of 18 I moved to Poland to study. I moved into a student house with a group of boys and I felt relieved to be one of the guys; something I’d not felt before. We became friends but a lot of the time we spent together was centred around drugs and alcohol. I thought this was the fun and camaraderie I always wanted but it really was superficial and I felt myself sliding into depression.There was a time when I was smoking weed twice a day for 8 months but there was no true joy in it. I watched gay porn which became even more enticing. I tried sleeping with a girl but it wasn’t successful. After all this self-seeking behaviour, I was at a state where I no longer wanted to live and just didn’t feel capable of doing anything. I didn’t want to be gay and I thought it was better to die than to live on. I was carrying so much shame and I couldn’t express to the people who were meant to support me.

It was around this time my sisters became born-again Christians and they started telling me more about God. I believed in God but all I knew about him was through religious practices that didn’t mean much to me. Out of the blue one day, one of my sisters gave me a book about true Christianity and what God can do in our lives. This particular book was able to convince me that God could help me with my addictions and depression. I’d never prayed to God before, so I took a chance to see if He would listen, and He did. I felt my depression leave me not long after and received wisdom to understand that everything I do in life is simply a choice and mine alone. It was humbling to realise that I chose to take drugs, I chose to indulge in porn and essentially I chose to be unhappy. So this time, I chose to repent. I realised I had been angry at God but I gave up that anger and reopened my heart to receive Him and I’ve not looked back since.

I was baptised in August 2019 and eventually graduated from university in July 2020. Little did I know that my sisters had been praying for me for a few years as they saw me getting closer to death through my sinful lifestyle. I continue to pray myself and I’m so excited to feel God’s love and see His signs. This relationship with my heavenly Father was what I needed all along and is far more fulfilling than the sinful lifestyle I used to lead.

He continues to change my life. I’m learning to abstain from pornography and lust altogether and God brought me to work in a DIY store where I can learn practical skills to become the man that He has intended for me to be. I feel more confident as a man as time goes on, with God’s help. There are many things in me that still need to change but I know He is real and He is truth.