I was so afraid to talk about my story, about my past because of my family, my friends, people around me. But I knew it was the right thing to do so it all has to start with being vulnerable. And I am vulnerable now in front of you.

I know that out there are a lot of you who need to hear this. You are not alone and your struggles are not gonna last forever. And you’re neither forsaken nor forgotten. I’ve come to know that God is healing. And God can take your pain, your suffering and your shame and make something beautiful out of it, so that it would impact millions of lives.

Believe me, I wept when I knew I should do this, but I do it trusting that God really can save someone’s life through this. 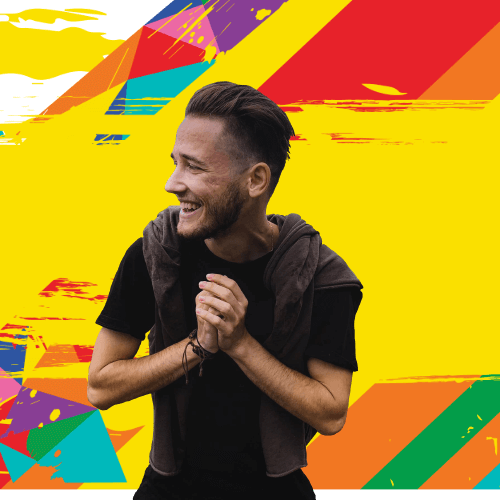 I grew up in a non-Christian family. I mean my parents always knew about God, kinda knew about His existence, but they never prayed or go to church or at least do something that would let them call themselves believers or Christians. I always knew about God from my grandma. She taught me to pray and told me about Jesus and who He is. It was very few of it, but however I’m so thankful for that.  There I truly understood who Jesus was and what He did on the cross. At that camp I had decided to repent and to accept Him in my heart as Savior and best friend. I just cried a lot, like a few hours and neither couldn’t stop nor explain what that feeling was.

Unfortunately when I got home I returned to my old lifestyle. I was excepting for a big supernatural change but it never happened. And so I did every year: I was going at the same camp every summer, having the same deep moment and feeling until I got back home. But at a certain point, at 16 or 17 I guess, I started to read the Bible, to go to church. And things like began to move a little bit.

As a throwback, also at 13 or 14 years old I discovered sexuality. As every child or teenager I started to learn about it, to learn about my body, about my attractions, about everything. In that period and even more after I was very alone, I had no friends. I was a forever alone guy with a lot of depressions. That’s why at the moment I discovered I like both boys and girls I didn’t know how to react, neither it was normal or not. In the same time I had a lot to do with hatred and bullying. I was so used to it because of my appearance, because I looked so different than the other guys of my age. Also, I was very skinny because of some serious health problems. More than that, I had very bad acne and remember I just didn’t want to leave the house because of shame.

“I just didn’t want to leave the house because of shame.”

I felt like my parents don’t understand me. It was about 90% of my struggles they didn’t know about. I was and felt completely alone. I just couldn’t understand what I did so bad and so wrong and why those things happened to me. Why I was supposed to suffer so much. I even remember like begging friendship from some people that seemed cool to me and I just wanted them to be models for me. It was so hard to be so vulnerable every time and just to be kicked out of every group and every situation and all this stuff. And now that new thing with sexual identity. Later I learnt what society has to say about it. I understood that it was not normal, but just couldn’t why I liked it and why I felt like that.

Or do you not know that wrongdoers will not inherit the Kingdom of God? Do not be deceived, neither the sexually immoral nor idolaters nor adulterers nor men who have sex with men nor thieves nor the greedy nor drunkards nor slanderers nor swindlers will inherit the Kingdom of God. And that is what some of you were. You were washed, you were sanctified, you were justified in the name of the Lord Jesus Christ and by the Spirit of our God.

I discovered that and just couldn’t stop thinking about it. Very weird was the fact that despise all of that I never admitted I was a gay or a bisexual. Neither even when doing things nor when talking to other gay guys. I wanted to quit it but just didn’t know how. I felt like trapped in there.  I was embarrassed a lot for my thoughts, for my desires, for my actions, for what I was. And just started to have that wrong and guilty feeling in front of God. I hated me, I hated my life. I used to cry a lot. There were seasons when depression felt like a usual thing and just felt like home in my anxiety and loneliness. After leaving my country for university, after several months of being again away from God and living a mediocre life I discovered a church and some people that were really into everything God is. I started to go to that church and that was the real moment when I got closer to God and prayed a lot. Then I began to know Him more and more; more about His love, His justice, His grace, about everything He is. At a certain point a felt like better, just didn’t think so much about my problems, about my past, about my struggles. I just used to remind God about them in some of my prayers, usually when I fell or when I felt so down. I just was trying to leave it all behind. Of course there were a lot of ups and downs; there were a lot of battles inside my mind and my body. And it was terribly hard because there was nobody to talk about, nobody to know it. I was alone in my fight and that was terrible. But, at a certain point God told me that He gives me healing. And that I should go to others and tell them about my victory and about my past. I was so happy; I just felt it inside my body, inside my heart. I felt His touch upon me and the words He gave me.
I also had to understand that it has to be a process and I had to walk into that healing in obedience and thankfulness. And it only depended on me rather I was well or not. It depended on how much time would I spend with Him and what would be my attitude regarding everything happening in my life. I really wanted to do that: to give up myself, to give up my sins, my past, my old lifestyle, my will, my bad habits and just to lay everything at His feet. So that’s what I did. There were freaking hard things to do, but I just called upon His name and grace to help me move on. And every time I failed I would stand back up and move further. Cause Jesus Himself told me that His love and His opinion about me doesn’t change and it doesn’t depend on things I do, as long as I fight with all my sins and don’t accept them in my life and don’t enjoy them. And that was overwhelming. There is something from Isaiah, which I urge you to take personally, as written for you.

But now, this is what the Lord says: Do not fear, for I have redeemed you; I have summoned you by name; you are Mine. When you pass through the waters, I will be with you; and when you pass through the rivers, they will not sweep over you. When you walk through the fire, you will not be burned; the flames will not set you ablaze. For I am the Lord your God. Since you are precious and honoured in my sight, and because I love you, I will give people in exchange for you, nations in exchange for your life. Do not be afraid, for I am with you.

So, at God’s word I made this public. I felt the mercy God has for everyone out there. I felt His heart for people. And believe me: I’m so happy now! I know what I should do next with my life, I know my purpose, I know who I am and what’s inside me. And I’m so thankful to God for all of these.